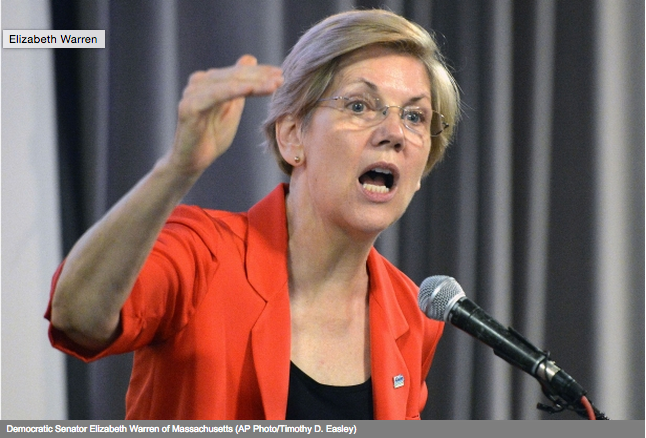 The op-ed below appeared in The Nation on Nov. 19.

From the rubble of the 2014 election, a conversation has started about the future of the Democratic Party. Senator Elizabeth Warren is central to that conversation.

This week, we learned that Warren will be joining the Senate Democratic leadership as strategic policy adviser to the Democratic Policy and Communications Committee. In this role ai??i?? created specifically for her ai??i?? she will help craft the partyai??i??s policies and priorities as well as serve as a liaison to progressive groups.

While there is some skepticism about the idea of a “liaison” to base Democratic voters, there is largely agreement that it is a good thing for the Democratic Party to follow her political footsteps. After all, she’s adored by big swaths of the Democratic electorate and the public at large. On the campaign trail this fall, she was welcomed with open arms in Kentucky, West Virginia, Michigan, and other reddish-purple states, drawing overflow crowds cheering on her message of tougher Wall Street regulation and kinder policies for working people.

But what is it that works about her? What is her special sauce? Other Democratic and progressive candidates ask me all the time how they can capture the intangible “it,” that Warren magic. Below, I’ve dissected her tactics and her policies, which are one and the same, to help candidates better understand how to tread her path.

Take, for example, the Consumer Financial Protection Bureau (CFPB); the idea that students should be able to borrow money for school at the same interest rate as banks can borrow money from the federal government; and the idea of adding basic banking ai??i?? check-cashing, bill-paying, and small loans ai??i?? to post office locations.

These proposals have a number of things in common. Whatai??i??s Warrenai??i??s formula?

1.Ai??Propose big ideas. All of these proposals are big ideas, ambitious in scope, and intended to grapple with large-scale problems. These ideas are not nibbling around the edges. Sixty-eight million vulnerable Americans don’t have access to reliable, affordable banking services. Forty million Americans owe a collective $1.2 trillion in student loans. Many lives would be made better if these ideas were brought to life.

2.Ai??Be bold. A bold idea has an edge, an in-your-face attitude. A bold idea takes on a villain. The post office proposal, for example, would largely dismantle the scurrilous payday-lending industry, which is part of the larger institutional and structural system that keeps poor people poor. The CFPB was built to challenge credit agencies and swindlers. Implicit in the student-borrowing proposal is a subtle critique of the banking industry.

3.Ai??Adopt ideas from elsewhere. You don’t need to conceive of an idea from thin air. Borrow! (Attribute, but borrow!) Warren’s background as an academic may be what makes her so successful at this, because academics feel very comfortable borrowing and building on others’ ideas ai??i?? in fact, it’s how the community moves its collective body of work forward.

The post office proposal is not new. In fact, nearly every developed nation in Europe and West Asia operates a postal banking system. But when Warren chose to embrace it, the proposal instantly became more serious, salient, and gained widespread attention because her position on the Senate Banking Committee gives her the ability to help make it happen.

Similarly, the idea of a government agency to protect consumers had floated around since the 1970s, and is even arguably rooted in the work of turn-of-the-century progressives like Florence Kelley. But it took Warren’s tireless advocacy to bring it to life.

4.Ai??Put muscle behind the idea. Warren becomes an advocate for her ideas and knows how to organize. She pushed relentlessly for the creation of the CFPB, fought to give it teeth, and built a large grassroots coalition to push for it when insiders thought it couldn’t be done. When she proposes new policy, she blogs about it. She speaks passionately about it on the Senate floor. She recruits colleagues to co-sponsor legislation. When Warren proposes an idea, you know she will keep pushing to make it a reality.

5.Ai??Act within the scope of your expertise. Warren is not proposing big ideas to address the climate crisis (although I don’t think anyone would complain if she did). She sticks to what she knows. She’s an expert in banking. She sits on the Banking Committee. She has carved out this area as her niche, and so her ideas have the gravitas of her expertise behind them. This gives them instant credibility.

6.Ai??Propose stuff that is popular.Ai??Polling shows that the proposal to add banking services to post offices is hugely popular. So is the proposal to allow students to borrow money at the same interest rate as banks. Propose ideas that you think people will like! There is a weird conventional wisdom in the Beltway that popular is bad. Popular is good. Be popular.

7.Ai??Be brave. After Senate Republicans refused to confirm her as the permanent head of the CFPB, Warren ran for Senate and defeated Scott Brown, one of their own. Zephyr Teachout won comparisons to Warren when she ran a gutsy primary campaign against Andrew Cuomo for New York governor. People like courage. They gravitate towards it.

8.Ai??Be independent. The day after Warren joined Senate leadership, the press leaked that she planned to oppose President Barack Obama’s choice for Treasury undersecretary, Wall Street investment banker Antonio Weiss. Speaking on background, one of her advisers told reporters that Warren had “growing concerns with the administration being loaded with so many appointees from Wall Street.” This independent streak ai??i?? opposing the Democratic president when it is ideologically and politically important to do so ai??i?? ironically gives her more power by making others sweat for her support. It gives her more leverage. It’s a game that conservative Democrats play well, and progressives often play poorly.

9.Ai??Be bipartisan, but not for its own sake. Warrenai??i??s independence has allowed her to forge bipartisan partnerships. She has worked with Senators John McCain and Angus King to introduce a new Glass-Steagall Act, and collaborated productively on other banking issues with unlikely bedfellows David Vitter and Tom Coburn. But as Warren herself cautioned in aWashington PostAi??editorial just after the election, “Before leaders in Congress and the president get caught up in proving they can pass some new laws, everyone should take a skeptical look at whom those new laws will serve.” In other words, avoid action for the sake of action. Avoid bipartisanship for the sake of bipartisanship. The point of bipartisan action, in the Warren playbook, is to advance meaningful policy ai??i?? not just to do something, anything, no matter how empty or even harmful.

The road to 2016 starts today. Democrats in Congress have a choice. They can become less and less popular as they pursue tepid policies that seek to pacify everyone and please no one. Or they can tap deep into themselves ai??i?? into the parts that are most courageous, most audacious, most good. They can pursue a road map that is both ideological and tactically advantageous. They will be surprised at the results.