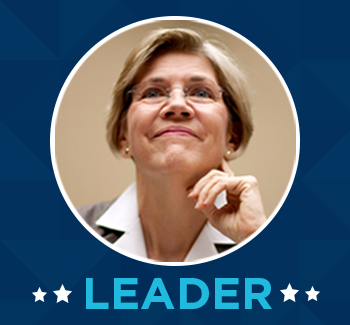 Sen. Elizabeth Warren (D-Mass.) gained a leadership position in the Senate Democratic caucusAi??Thursday […] Warren’s role, which is a new position created specifically for her, will be in crafting the party’s messaging and policy.

This is a good reminder that when PCCC members invest early in progressive leaders, it’s not just about winning elections in the short term — it’s about building power over time.

As Elizabeth Warren advocates for big ideas like reforming Wall Street, making college affordable, and expanding Social Security benefits, her voice will now be even louder — because she’ll be at the Democratic leadership table.

Click here to sign a congratulations card to Elizabeth Warren (and add a personal note), which the PCCC will deliver to her.

The PCCCAi??ran the “Draft Elizabeth Warren for Senate” campaign and was herAi??#1 grassroots supporter in 2012Ai??raisingAi??over $1.17 million through over 70,000 small-dollar donations for her campaign. The PCCC partnered with Warren on big legislative pushes in 2013 and 2014.

With this news, that partnership grows stronger — and all of Elizabeth Warren’s and the PCCC’s work together has more impact.