By Progressive Change Campaign Committee | Posted on July 24, 2014 | No Comments 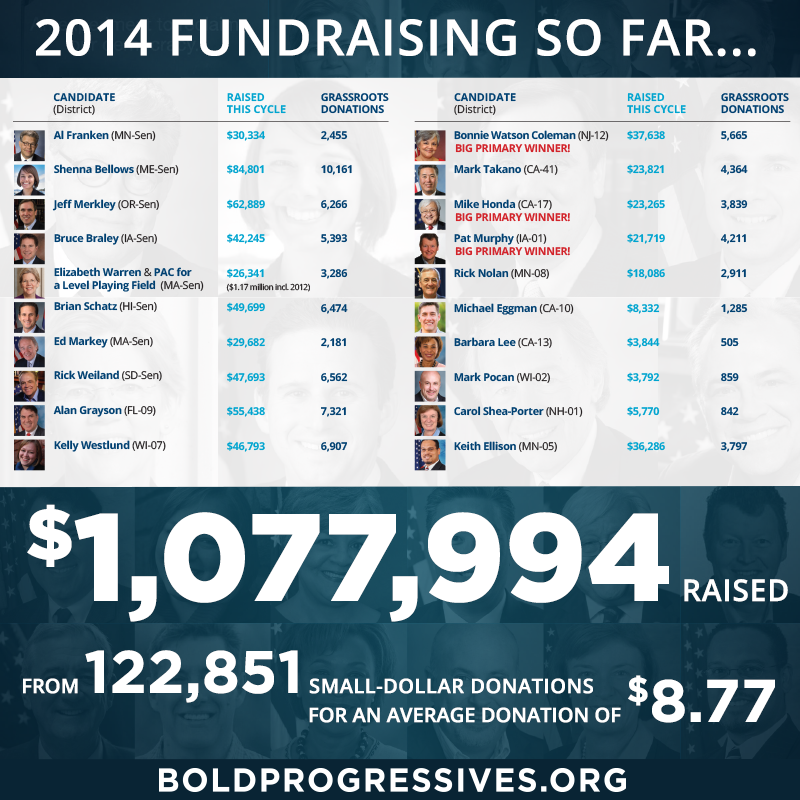 “Candidates for sale turn to K Street lobbyists for help; candidates with a conscience turn to the PCCC. The PCCC is the foundation of a future America based upon the fundamental principles of justice, equality, and peace.”
–Ai??Congressman Alan Grayson (FL-9)

This is what Congressman Grayson had to say as we reached a big fundraising milestone this week:Ai??overAi??$1,000,000 raised directly from 122,851 small-dollar donationsAi??for progressive candidates and campaigns this cycle.Ai??Our milestone has already been covered by NBC, CNN, Politico, and the Washington Post, and many more.

Raising this kind of money is what helped us elect Alan Grayson to the U.S. House and Elizabeth Warren to the U.S. Senate in 2012.Ai??If we keep this up, we’ll be able to elect over a dozen Warren and Grayson allies to Congress in 2014.Ai??We’ll show the country that the path to winning elections — and keeping the Senate –Ai??is to campaign and govern on an economic populist agenda including Wall Street reform, expanding Social Security benefits, and reducing student debt.

Pooling our money for candidates together through the PCCC is helping us to advance a bold progressive agenda in a way that we never could before.Ai??A dollar from us goes a lot further than a dollar from a billionaire or a big corporation because it represents people powerAi??– and with it comes actions, calls, campaign support, and progressive energy that no one else can provide.

Now is the time to pour it on. Candidates like Senator Al Franken are being attacked every day, and the last Democratic primaries are coming up in the next few weeks.Ai??Bold progressive candidates need an infusion of money and support now to help them continue to build their grassroots campaigns.Ai??Ai??

(Then, donate $4 to help finish the job this year — and elect candidates we can be proud of.)