Help Edward Snowden: The 29 Year-Old Who Revealed The Government’s Spying 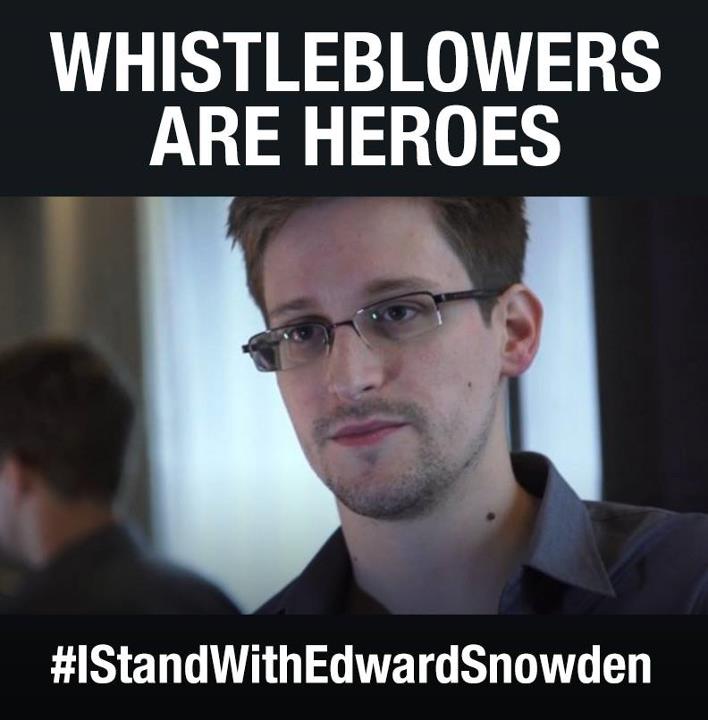 The Guardian has just published an article about and video interview with the man behind the NSA leaks. 29 year-old Edward Snowden works for the massive defense contractor Booz Allen Hamilton and is a former technical assistant to the CIA. Snowden explained to the Guardian that he realized he was risking extreme harm to himself by revealing the government’s spying programs, but that he wanted the public to know the truth about the massive surveillance state. “What they’re doing” poses “an existential threat to democracy”, he warned, and also said that the NSA “routinely lied to Congress,” which would be a crime.

We’re raising money for aAi??Edward Snowden Legal Defense Fund to help him defend himself and tell his story. Can you chip in $10 and tell others too?

Read more from The Guardian:

The individual responsible for one of the most significant leaks in US political history isAi??Edward Snowden, a 29-year-old former technical assistant for theAi??CIAAi??and current employee of the defence contractor Booz Allen Hamilton. Snowden has been working at the National Security Agency for the last four years as an employee of various outside contractors, including Booz Allen and Dell.

The Guardian, after several days of interviews, is revealing his identity at his request. From the moment he decided to disclose numerous top-secret documents to the public, he was determined not to opt for the protection of anonymity. “IAi??have no intention of hiding whoAi??IAi??am becauseAi??IAi??knowAi??IAi??have done nothing wrong,” he said.

Snowden will go down in history as one of America’s most consequentialAi??whistleblowers, alongside Daniel Ellsberg and Bradley Manning. He is responsible for handing over material from one of the world’s most secretive organisations ai??i?? theAi??NSA.

In a note accompanying the first set of documents he provided, he wrote: “IAi??understand thatAi??IAi??will be made to suffer for my actions”…

He has had “a very comfortable life” that included a salary of roughly $200,000, a girlfriend with whom he shared a home in Hawaii, a stable career, and a family he loves. “I’m willing to sacrifice all of that becauseAi??IAi??can’t in good conscience allow the US government to destroy privacy, internet freedom and basic liberties for people around the world with this massive surveillance machine they’re secretly building.”

By 2007, the CIA stationed him with diplomatic cover in Geneva, Switzerland. His responsibility for maintaining computer network security meant he had clearance to access a wide array of classified documents.

That access, along with the almost three years he spent around CIA officers, led him to begin seriously questioning the rightness of what he saw…”Much of whatAi??IAi??saw in Geneva really disillusioned me about how my government functions and what its impact is in the world,” he says. “IAi??realised thatAi??IAi??was part of something that was doing far more harm than good.”

He said it was during his CIA stint in Geneva that he thought for the first time about exposing government secrets. But, at the time, he chose not to for two reasons.

First, he said: “Most of the secrets the CIA has are about people, not machines and systems, soAi??IAi??didn’t feel comfortable with disclosures thatAi??IAi??thought could endanger anyone”. Secondly, the election of Barack Obama in 2008 gave him hope that there would be real reforms, rendering disclosures unnecessary.

He left the CIA in 2009 in order to take his first job working for a private contractor that assigned him to a functioning NSA facility, stationed on a military base in Japan. It was then, he said, that he “watched as Obama advanced the very policies thatAi??IAi??thought would be reined in”, and as a result, “IAi??got hardened.”

The primary lesson from this experience was that “you can’t wait around for someone else to act.Ai??IAi??had been looking for leaders, butAi??IAi??realised that leadership is about being the first to act.”

Over the next three years, he learned just how all-consuming the NSA’s surveillance activities were, claiming “they are intent on making every conversation and every form of behaviour in the world known to them”.

He described how he once viewed the internet as “the most important invention in all of human history”. As an adolescent, he spent days at a time “speaking to people with all sorts of views thatAi??IAi??would never have encountered on my own”.

But he believed that the value of the internet, along with basic privacy, is being rapidly destroyed by ubiquitous surveillance. “IAi??don’t see myself as a hero,” he said, “because whatAi??I’m doing is self-interested:Ai??IAi??don’t want to live in a world where there’s no privacy and therefore no room for intellectual exploration and creativity.”

Once he reached the conclusion that the NSA’s surveillance net would soon be irrevocable, he said it was just a matter of time before he chose to act. “What they’re doing” poses “an existential threat to democracy”, he said.

The Guardian also published a Q-and-A with Snowden, where he explained more why he did what he did:

Q: What do the leaked documents reveal?

Edward Snowden: “That the NSA routinely lies in response to congressional inquiries about the scope of surveillance in America. I believe that when [Senator Ron] Wyden and [Senator Mark] Udall asked about the scale of this, they [the NSA] said it did not have the tools to provide an answer. We do have the tools and I have maps showing where people have been scrutinised most. We collect more digital communications from America than we do from the Russians.”

Yesterday morning, Sen. Dianne Feinstein (D-CA) called on prosecuting the leakers behind the NSA documents.Ai??We can’t let this hero be treated as a villian. That’s why we’re raising money for aAi??Edward Snowden Legal Defense Fund to help him defend himself and tell his story. Can you chip in $10 and tell others too?